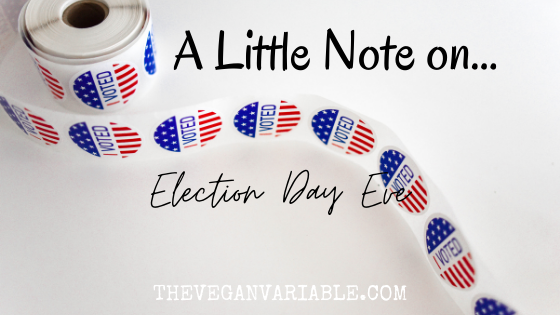 Last year at this time, I was writing out my yearly blogging plan (I always create a list of posts I think will be beneficial in the coming year), when I realized I had a very unique opportunity to really dig in and weigh the presidential candidates in terms of how animal-friendly they were. I wanted it to be as bi-partisan as possible, looking at more than just the mainstream candidates (because I think both Republicans and Democrats are FUCKING INSANE). I made a chart, I started taking notes and looking at sponsored bills, comments, and actions. And then, you know what happened?

A whole lot of nothing.

2020 came in with a vengeance, and it’s really been quite a nightmare. For a lot of reasons. Anyway, the post went the way of so many others – sitting in stagnant water.

But such is life.

I wanted, however, to weigh in on the election. The night before. Great timing – I know!

If you’re looking for any other candidate (or more likely, on your knees every night begging God for a reprieve from the circus the US political system has become), it’s my opinion that the Green Party’s Hawkins/Walker option may be the best option for you – and for the animals. NOTE: They are a write-in option in Wisconsin.

Even though I don’t have a lot of faith in the voting system, I hope you go out and vote tomorrow. I hope you think long and hard about which candidate you believe can do the most for animals. Maybe there’s a niche in animals rights that tugs at you a little more than the rest – vote for who can help you with that. Maybe you feel animal rights will be best served by a candidate who believes in another aspect of our culture – vote for that person. Maybe it’s the running mate you’re really hoping gets a chance to make his/her mark.

Whatever your reason, go vote. And then, no matter who wins, let’s work together to push animal rights to the front of the agenda. No bitching, no rioting, no slander. Let’s just work with the people around us to build up our communities into something we can be proud of. Something that benefits us all, both human and non-human animals alike.