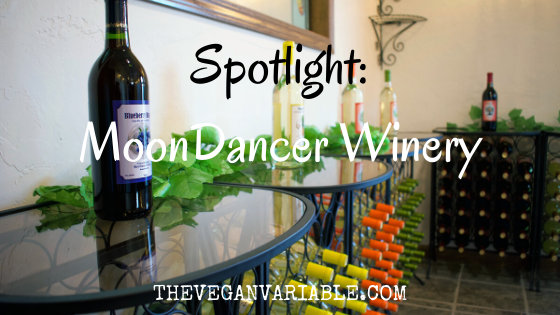 In the sleepy little town of Auburndale, Wisconsin sits a small building. It’s inauspicious and tucked away behind the other businesses that sit on the main street of this postcard-sized hamlet. As you approach, you start to realize there’s more to this building than you can see from the main street. Surrounding the entrance is a garden – a wine garden – hidden away from its ordinary surroundings by tall lattice fences and planters, keeping its magic close.

After you walk through the wine garden, you enter the boutique winery and immediately realize this is no ordinary place. From the artwork to the lighting, you can sense the old-world charm and hospitality that make MoonDancer Winery what it is. And if you ask the winemaker (also the man behind the counter) for a vegan selection, he’ll happily tell you they’re all vegan!

That’s right! As with so many other things in life, we are startlingly reminded that the simplest things are not always vegan. And wine is one of them.

The step in wine-making that determines wine’s “veganity” is the clarifying process. The clarifying agent (the stuff that makes wine clear) is often produced from egg whites or fish bladders. Despite these agents being the more popular choices, vegan alternatives exist.

One such vegan clarifier – the one used by Moondancer Winery – is called Sparkolloid, a very fine clay made from seaweed.

“If you set a non-vegan wine next to a vegan wine,” explains co-owner and winemaker John Hrusovszky, “I guarantee you, nobody can taste or see the difference.”

Officially opened in 2019, MoonDancer Winery was a concept that took nearly 20 years to bring to fruition.

Owners, John and Carol Hrusovszky have long enjoyed sampling wines. But it was a trip to Italy in 2001 that really made wine-lovers out of them.

“In Europe,” Carol says, “they have this attitude where it’s fine wine and fine conversation. It just was such a wonderful feel to have a theory behind it. It was a way of life.”

In 2006, they began experimenting with home wine-making. It wasn’t long before they began to get requests from friends who wanted to purchase their wine. Serial entrepreneurs, they already had a lot on their plate, but were looking to the future.

“We planned to make this our retirement business,” says Carol. But before retirement could hit, they decided to add another log to their fire.

They began the process of opening MoonDancer Winery in 2017. “The permits were unbelievable,” recalls Carol. “And every time we thought we had something settled we either needed another permit or we had to adjust what we were doing.” That included switching locations because their first choice was not as suitable as their current one turned out to be.

Their choice of clarifier also had to be changed, as Carol is a vegetarian.

“When a winemaker makes wine, and his wife says ‘No, I ain’t gonna drink any’, you gotta find a way to change that,” jokes John. Ensuring Carol can drink the wine her husband makes is paramount, but it also provides an all-inclusive customer base. And with the rapidly-expanding vegan community, that’s a wise move.

In August of 2019, MoonDancer Winery finally opened its doors. And the response has been wonderful. On average, they make 300 – 400 bottles of wine per month.

“We make small artisan batches,” explains John. “We sacrifice zero for flavor. By keeping small batches we feel we can better control that.”

Varieties range from dessert wines to fruit wines to dry reds. Their signature wine is called Templar Red, a semi-dry red that has a unique story behind it.

As John and Carol were beginning their winery journey, John became a Knight’s Templar. “There are bona fide descendants […] that have an international order of Knights Templar, and they do accept people to join that organization,” says John, who has already been approved to be knighted. “I was supposed to be knighted last year in Connecticut. I couldn’t make it. This year it looks like it’s on the same date as our 38th anniversary.” But the postponement might be a blessing in disguise, as he’d ultimately like to travel to Scotland for the ceremony.

Knight or not, MoonDancer Winery’s Templar Red is a nod to the old world. It is their boldest, heaviest red semi-sweet blend. And that’s the taste John and Carol want.

In addition to being the wine-maker, John is also the man behind the counter. He’s the face you’ll likely see when you enter the building, and the guy who’ll pour you a glass or two.

“The winemaker is the person pouring your wine, talking to you, guiding you on how to taste wine,” notes Carol. “And people seem to really appreciate that they get that advice. They get an experience rather than just a flavor.”

As for the future, both John and Carol excitedly declare their plans for growth, adding nightly entertainment, wedding and corporate wine labels, and hosting an annual Moon Dance.

“I don’t want to grow it into a crazy business that requires we have to be there 24/7,” says John. “We’re past that stage in our life. At this point it’s fun, it’s not work. And we wanna keep it that way.”

“We are developing the wine garden,” adds Carol. “So, as soon as the weather warms up, the flowers are gonna be planted and we are going to create a beautiful wine-floral fantasy.”

And a near-fantasy is just what customers will get! Visiting MoonDancer Winery is a beautiful, welcoming, and warm experience that’s sure to bring you back time and time again whether you’re vegan or not. And don’t forget to ask John to sign your Templar Red label before you leave. It’s become customary of those who ask about “the Templar thing”. It’s also a perfect memento and keepsake of the small winery with big taste.

Published in Drink, Food and Lifestyle