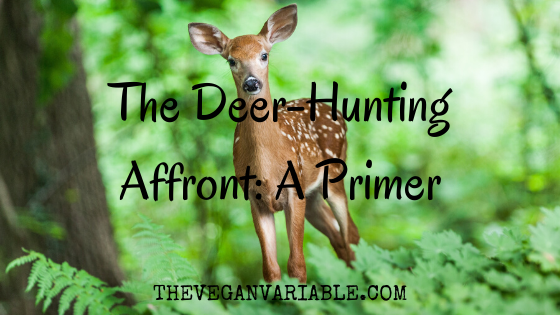 The Deer-Hunting Affront: A Primer for Animal Rightists

Wisconsin’s magical autumn includes a heinous tradition. Deer-hunting. It starts in September, continually darkening and consuming the end of the year. Kids are encouraged and excused from school to hunt, every gas station attendee is trained in tagging the kill, and stores of all kinds – shoes to restaurants – have deer-hunting specials.

While it should be called mass-murder, it’s instead called a harvest. And it happens every year.

The reasons (read “excuses”) are plentiful, and they range from tradition to family-bonding; from reaping the health-benefits of being outside to the economic-boost hunters bring to an area.

These are weak excuses.

We all know there are several ways you can bond with your kids that don’t include teaching them to kill others. And if you want to bring an economic boost to your area, create a festival. Build a waterpark. Celebrate something in the most extravagant way possible. People will travel thousands of miles to attend something unique. But it should never include killing.

Conservation is probably the most cited reason for deer-hunting. And it is important. But humans have largely become the reason we need to conserve nature at all. We move species out of areas, we move species into areas. We hunt species to near decimation, then put them on endangered lists. We pollute. We generally just don’t give a fuck. And, in the case of deer-hunting, the deer population would have been kept in check by nature if we hadn’t decided that wolves were a problem. But we allowed people to hunt them, which in turn led to larger deer populations (not enough predators) and disease. In short, WE are the problem.

As for the current state of hunting, the Wisconsin Department of Natural Resources (DNR) allows death by bow and arrow, gun, and muzzle-loader. They have a special season for the disabled to hunt, and they encourage kids to go out and takes lives, desensitizing them to not only violence, but also the respect for life.

Since 2009, deer-hunting has declined drastically in Wisconsin. There were 451,000 deer murdered in 2008. In 2009, that number dropped to 309,000 and hasn’t risen above 369,000 in the years that have followed. There are several reasons for this, including the recession, an aging hunting population, and my favorite – the spread and awareness of animal rights and veganism.

But these dropping numbers do present a problem. Less hunting licenses sold means less money for the DNR to use to manage (responsibly) wildlife and the environment. And while I lose no sleep at night due to the decline in hunting (I only lose it to my 2-year-old who’s up at 5:30 every morning <sigh>), we do have to find a way to fund natural resource programs a in non-lethal way.

This, I feel, is something animal rightist and opponents of deer-hunting could work on finding a solution to. It would provide money for much-needed programs, while also sending a message that hunting is not acceptable to much of the population.

Hope is ever-present, though. Younger generations see the recklessness within this so-called “sport”. We want to create a better world – one with less violence. As such, we tend to look for solutions that don’t include violence. As they years pass, we’ll hopefully see a continued decline in hunting participation throughout the state.

Published in Animal Rights and Hunting