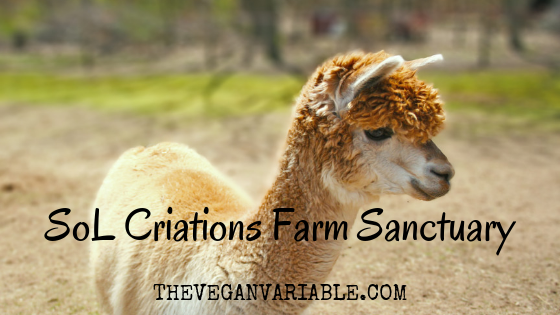 Tucked away on a back road amidst the family-run dairy farms of rural Wisconsin sits a quaint farm animal sanctuary. This property is home to alpacas, pigs, a donkey, cats, dogs, and several species of birds including turkeys and two Chinese geese named Hickory and Dickory.

While the sanctuary looks and feels like you’d expect a sanctuary to – well-kept spaces, free-roaming animals, peaceful environment – this sanctuary actually used to be a farm – an alpaca farm – which was run by the same two people who currently run the sanctuary. And while that makes this sanctuary unique, it’s far from surprising.

Farmers all over the world are turning to lives of compassion. Dairy farmers, cattle ranchers, lamb farmers, etc. It’s like a mass-awakening, and it’s happening every day. For Brenda and Jon Vetter, that awakening happened 5 years ago.

Both Brenda and Jon grew up in southern Wisconsin. They were city kids who never questioned the standard American diet they ate or the cruelty of the industries that provided it. “My dad was a meat inspector and a butcher,” recalls Brenda. “[He] worked in slaughterhouses. He didn’t do the killing, but he was there.”

Brenda and Jon moved to their current property partly to be surrounded by woods. They both loved nature and camping, and Jon hunted. After their house was built, they decided they wanted to be more self-sufficient. That meant homesteading – heating their house with wood and raising animals for eggs and meat. Though Brenda, who ate meat at the time, knew she could never butcher an animal she had cared for. So, while they did raise chickens for eggs, they never butchered them. And instead, they fell in love with alpacas.

They bought six alpacas after taking classes, going to seminars and shows, touring farms, and learning everything they could about these fluffy creatures. The plan was to raise them for their fiber and breed them to sell. But Brenda questioned many of the practices they had been taught about alpacas, which included selective breeding, gender segregation, and separating the crias (baby alpacas) from the mothers much sooner than was healthy for either of them.

Also at this time, Brenda and Jon’s kids were involved in 4-H. This, too, was a stumbling block for Brenda due to the objectification of the animals and the kids being taught that the animals they’ve developed bonds with would ultimately have to be sold and killed. And that just didn’t sit right.

So, the Vetters dropped out of 4-H and, after the alpaca industry started slaughtering alpacas for meat, quit the alpaca business. Brenda spent nearly two years immersed in researching the truth about animal agriculture and factory farms. And, as everyone who peels back the tint is, she was horrified at her findings. So was Jon. Shortly after, the family went vegan, Jon stopped hunting, and the Vetters knew the best thing they could do was to share this information with as many people as possible. So, that was the end of the homestead and the beginning of SoL Criations Farm Sanctuary (SoL = space of love, and Criations = a play on “cria” or baby alpaca).

Without making much of a fuss over it, they changed their sign out front to reflect that they were no longer a traditional farm and instead a sanctuary. And despite being surrounded by traditional farms, they haven’t heard anything, good or bad, from their neighbors about the change.

Aside from those few complicated relationships, SoL Criations Farm Sanctuary is flourishing. In 2017, it was officially made a non-profit. And the outpouring of support within the animal rights community has been a blessing. “It’s been the best thing ever. Our community has grown, our support has grown. It’s been overwhelmingly successful.”

This is, in large part, due to the many functions and events SoL Criations puts on. Yoga in the pasture, a monthly vegan potluck, volunteer days. All of these help build the community and raise awareness. Schools can even schedule field trips to the sanctuary. The kids get to tour and meet the animals where they learn about everybody’s background in age-appropriate fashion. “I don’t want to horrify anybody, but I also want them to know the truth,” says Brenda. “The hardest part, though, is you can tell these little kids the truth in a gentle way, and they make the connection right away, or they fall in love with the animals, and then they go home and their parents say, ‘No, I’m sorry, that’s not how it is, it’s not okay.’ And they can’t make that change on their own. So, it’s tough. High school and college kids are great. They’re ready to make those choices on their own, and they have that potential. […] And they’re ready to hear the truth.”

And the truth changes people. Multiple people who have toured the sanctuary have called Brenda to tell her they’ve given up eating pork after meeting and learning about the pigs. That someone can be so completely transformed in a single visit is certainly a testament to the hard work and love Brenda and Jon put into the sanctuary.

There’s still much to be done, though. Right now, one of the two main projects is recovering from the tornado that blew through the property last August. Buildings were damaged and trees were knocked down making some paths in the woods impassible, but, thankfully, all the animals were unharmed.

The other project is building another space for the smaller pigs. The funding for this was achieved just this past week at the monthly potluck. Not only will this be fabulous for the smaller pigs, but, hopefully, the extra room means that a couple more animals will get to call this place home.

Right now, SoL Criations Farm Sanctuary, like many other sanctuaries, is full. But as more funds come in and more people regularly volunteer (SoL Criations’ most immediate need), the number of residents can continue to grow. And that’s something Brenda desperately wants. “We have 71 animals right now, and there'[re] billions, literally billions, of others out there suffering.”

The majority of funds for the sanctuary come from donations, but Brenda and Jon still put in their own money to take care of odds and ends. Through May of this year was the first time they had been able to run the sanctuary on donations alone. If they hadn’t needed to increase the residents’ space, they may have been able to get through the year without their own additional contributions.

There are also chores to consider. While the majority of the daily duties at the sanctuary fall on Brenda and Jon (3 hours in the morning to feed, wash, and clean, and 1 or more hours at night), the animal rights community has been super supportive. People from all over come for volunteer days to help with what needs to be done at the sanctuary. Many of them from the Milwaukee and Chicago areas. “A lot of the groups that come help us are animal activist organizations, like DxE or Chicago Animal Save. People who are out there doing rescues or doing outreach or doing vigils, going into the farms, going to the slaughter trucks, going to the slaughterhouses.”

It’s people like this – front-line activists – that Brenda and Jon hope find sanctuary here too. The land is not just a place for the animals to live out their lives peacefully, but also for animal rights activists and vegans to come together and recharge. “We try to support them and be here for the animals they rescue, but also for them to come here and spend time with the animals and see the happy, healthy, joyful animals, and be a community.”

It’s this ideology that makes SoL Criations Farm Sanctuary such a special place. It truly is a space of love. For the owners, for the animals, and for the community.

Published in Animal Rights and Sanctuaries