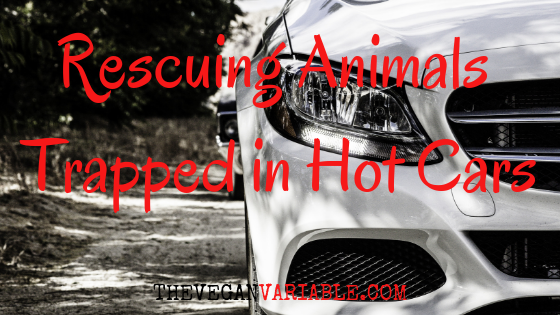 This past week, we were in Florida. It was a much-needed reprieve from the many, many sub-zero temperatures we’ve had this winter. Don’t get me wrong – I enjoy winter. I love the falling snow and the blankets they leave behind. I don’t even mind shoveling. But winter can get long.

Unluckily for us, we didn’t get the warm beach-going weather we expected while we were down there. It was mostly 60s and low 70s. But even that was warm enough to start me mulling over the thing I dread most about summer.

Each year, hundreds of pets die due to heat exhaustion caused by being left in hot cars. And, as an animal advocate, I know I’ll inevitably be faced with having to rescue some of them. The rescuing doesn’t bother me. It’s the lack of knowledge and hostility of the pet owners that makes me dread this time of year.

It’s an exhausting task for all animal rightists because it should be such a simple concept, but isn’t. And it’s especially exhausting for those of us who have social anxiety. How does a socially anxious person become an activist, you ask? That’s a good question, and a topic for another time. But we’re out there. And we do what we can.

In the summer, that means repeatedly explaining to people the dangers of leaving a pet in a hot car.

While dogs tend to be the associated animal to this topic, they aren’t the only pets who suffer. In fact, most animals’ lives are in danger when they’re left in a hot car. Dogs are usually left unrestrained, so they’re easier to spot. But cats and other pets who travel in carriers are just as susceptible to heat exhaustion. So, unless your pet is a desert tortoise or an ostrich, they should never be left in a hot car. But who brings their ostrich to the grocery story anymore?!?

Luckily, most states recognize these dangers and allow for you to save an animal in this situation if you believe its life or health is in peril. Wisconsin is one of those states! You can legally break into a car to save an animal’s life.

There are, however, recommended steps to follow before smashing someone’s car window.

Assess the situation. No matter how badly you want to jump into immediate window-smashing action, you need to know the basics. Is the owner near the car? Is the pet near death? Is the car actually running with the air-conditioning on? Some cars are so quiet that it’s hard to know if they’re running, especially in a busy area. And because dogs in hot cars is a loud issue right now, many owners have opted to posting signs asking you not to break their window because the air is on. So, it’s also important to check for these notifications.

Generally speaking, use your common sense and gut feeling for this step. While it’s temping to send a message to any pet owner who would leave their pet in a hot car, you also have to obey the law and try to find a peaceful solution.

Second, it’s recommended that you try to locate the owner of the car. That means, trudging into the store and requesting a clerk page the owner, usually by their license plate number. Once they’re located, you’re supposed to state your concern over their pet and its well-being.

But in my experience, this is a useless step. I’ve never been met with gratitude for looking out for someone’s pet, only hostility. So, I skip this step. I’d much rather let the police deal with these temper-tantrums because they’re trained to do so. And that’s the next step.

Alert the police. Tell them you’ve located an animal who may be in danger. If the animal is up and walking around, the police will usually request you wait until an officer arrives to assess the situation. If the animal is lying down, and you feel it could die, you’ll usually be instructed to try to open the door or force a window down. If that doesn’t work, you can proceed with more drastic measures like smashing a window.

REMEMBER: the glass will shatter on the animal, so try a window on the opposite side of the car.

Remove the animal if it’s safe to do so, and take it someplace safe. This may be directly to the vet or simply to your car, where you can turn the air on and get it some water. Not cold water, though, because cold water will cause cramping in an animal that’s been subjected to extreme temperatures. If you are taking the animal directly to the vet, make sure to let the 911 operator know, as they’ll direct you on what steps you need to take first.

Make sure you note the license plate of the car the animal was in on your 911 call and request any and all charges be pressed against the owner. Many times you’ll find the owner wasn’t intentionally putting their pet in danger, it had just never occurred to them that this action could be harmful. But the police will assess the owner and may be in contact with you afterward.

I also recommend keeping a record of the license plate and any information you get about the owner. In small communities, we tend to run into the same people over and over again, and this is great way to assess if their behavior is changing. If not, keep calling 911 when necessary, and let them know this person is a repeat offender.

Remember, the laws surrounding animals in hot cars are constantly being updated. Make sure you know how to handle this situation before the hot weather kicks in as to avoid any repercussions and, if you’re like me, unnecessary anxiety.

To find out the laws about saving animals in your state, visit the ALDF’s (Animal Legal Defense Fund) Table of State Laws that Protect Animals Left in Parked Vehicles webpage.