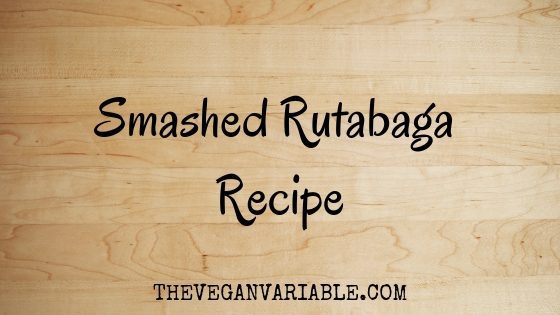 I received this really awesome cookbook for Christmas called The Vegetable Butcher. It has great information on choosing, cleaning, storing, and preparing vegetables, especially the not-so-common ones. And there are recipes to accompany each veggie. It’s totally amazing!

So, I’ve been looking through it, trying to find new dishes to serve my family. My husband will eat pretty much anything I put in front of him, but my kids are a different story. They’re incredibly picky and have polar opposite tastes. So, mealtime is a bit of a challenge. And that is my understatement of the year. So far.

Anyway, I found a really simple recipe involving rutabagas, which are a vegetable I’ve never tried before. So, I thought, let’s all try it together. Never mind that they’re supposed to taste similar to potatoes – a vegetable my oldest son simply will not eat. I’ll leave that part out, and then I’ll trick him into liking it by adding the suggested maple syrup!

The night I started making the smashed rutabagas, my husband and two sons were sitting at the table playing with Legos. I had started cutting off the waxed peel when my older son comes over to watch what I’m doing.

“What are those?” he asks with a concerned look on his face.

“Rutabagas,” I replied. There was silence for a minute.

“I don’t like rutabagas,” he said. “Can I have something else?”

I let out a long sigh and stared at him for a moment, waiting to see if he’d continue protesting. But he didn’t. He just looked back at me with this desperate look in his eyes.

I continued peeling. “You’ve never had rutabagas. You have to try them.”

So, I peeled them, then sliced them and covered them in water. I boiled them and smashed them. The whole time my son kept looking over at me like he was about to burst into tears. And I figured he would at some point – that’s his tactic. He can burst into tears at will. He’s going to be an actor. I’m sure of it.

I salted and peppered the rutabagas, added some vegan butter, and got out my secret weapon – the maple syrup.

“You’re putting maple syrup in them?” came a voice from the dining room. It was my husband. “I’d rather have mine without.”

I was a little shocked. I was certain the maple syrup would be the draw to this dish. But, being Daddy’s mini-me, our eldest tries to do things just like Daddy. I obliged, putting the maple syrup on the table, just in case, and then dishing us all up.

My husband and I both tried them and agreed out loud that they were pretty good. Our youngest son tried them, ate a few bites, then went back to his Legos. Not terrible, I thought. He did, after all, eat a few without spitting them out.

Our eldest flicked at them with his fork for a while before finally succumbing to his hunger. He slowing brought the fork full of smashed rutabaga to his lips. In it went. My husband and I watched out of the corner of our eyes. The boy said nothing as he continued to eat them all up.

“So, what do you think?” I asked him, smiling because I already knew.

“Pretty good,” he said with a mouth full of rutabaga.

I wanted to laugh, but I refrained. It was already a victory.

The recipe below is slightly altered from the one in The Vegetable Butcher. I recommend trying this recipe with maple syrup. They’re good with and without, and are incredibly filling.

Peel the skin off the rutabagas and cut into 3/4 inch pieces.

Place pieces into saucepan and add just enough cold water to cover them.

Bring to a boil over high heat, then reduce to maintain a gentle boil. Cook roughly 15 minutes, until tender.

Drain the rutabagas in a colander, transfer them back to the saucepan, and use a potato masher to smash them.

Stir in the butter. Add the salt, pepper, and maple syrup. Mix and adjust the seasonings as needed.

Published in Food, Recipes and Uncategorized