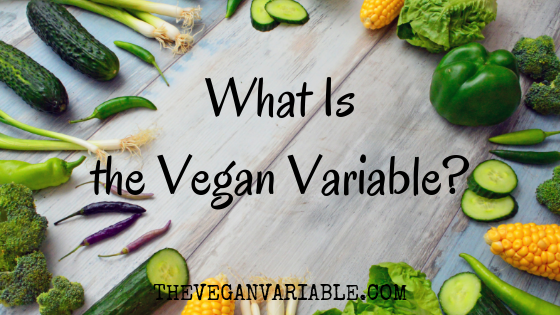 What Is The Vegan Variable?

When someone says they’ve gone vegan, food is what generally comes to mind.  We imagine them eating heaps of veggies and fruits, and not much else.  This, of course, isn’t incorrect, but it’s also not complete.  Vegans today have a wide variety of foods to choose from.  Not all of them are healthy. And, yes, it is possible to be a fat vegan.

But there’s more to veganism than what we put in our mouths.  It’s also how we live.

Vegans generally come to this lifestyle for one of three reasons: animal rights, health, or the environment.  If health is your reason, a vegan diet may be your only concern.  But for those who come to it to improve animal rights or the environment, almost every aspect of your life can be turned upside down.  This is what I call the Vegan Variable.

What do I mean by this?

Like plugging a number into an equation, the Vegan Variable is a parameter that is applied to an experience, situation, or purchase.  It is the ever-present lens in which vegans look through to gauge their lives and activities.

For example.  Say you need shampoo.  Instead of just going out and buying the cheapest or prettiest or most apt bottle of shampoo, a vegan has to look beyond that.  Has to consider the impact the product and the manufacturing of said product had on animals.  Was it tested on them?  Is it harmful to them?  Is it made by a company that promotes some form of animal abuse, or is the company run by someone who promotes this abuse?  Does the company donate money to a charity that promotes abuse (say, for research)?  And so on.

This variable is something that applies to every aspect of one’s life.  From the clothes you wear to the tires you buy, from the brands you love to the movies you watch, from the events you attend to the artists you support.  I could go on and on and on.  But you get the point.  The Vegan Variable is something vegans are always applying to their lives.  And in a world that is not set up to care, it can be daunting.

Thankfully, though, as awareness of injustices against animals grows, so does the movement.  And despite our so-called “fringe” numbers, vegans, animal rightists, and environmentalists have a lot to celebrate.

Vegan products are ubiquitous.  They often cost more, but they’re there.  And as more and more people join the movement, the prices will go down.  Movie studios and performers are ditching animals because of the backlash of the animal rights movement.  Less animals are being used in research.  More and more fashion designers abandon fur every year.  Conservation efforts to stop poaching are up.  The cruel meat and dairy industries decline more and more every year as people opt for meat and dairy-free foods.

The world really is turning vegan.  Not at the rate animal rightists would like, but it’s getting there!

All we have to do is keep up the effort.  Keep considering the Vegan Variable in our daily activities and purchases.  Because every little thing you do makes a difference.

So, tell me, what’s an experience you had that surprisingly included the Vegan Variable?  Let me know in the comments below.