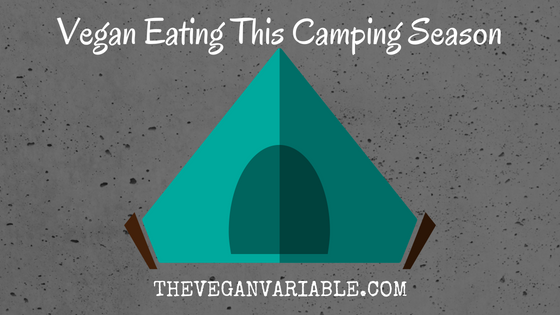 With winter coming to a close, a lot of people are gearing up for camping season.  This means airing out the tent, washing the sleeping bags, and putting together a stellar grocery list for those upcoming nature outings.

“Vegan” and “camping”, however, are not terms that are often paired together.  This is especially true for those who are new to the vegan lifestyle.  It can be daunting trying to replace old staples with new options, no matter how abundant.  And with amenities lacking in the great outdoors, you might be afraid of the amount of time you’ll end up spending on meals.

Fear not, though!  There are a multitude of options for us vegan campers.  And they require the same amount of effort you’d put into food preparation if you weren’t vegan.  In fact, with some ol’ fashioned planning, you’ll have everything under control.

When I think back to camping as a child, I remember eating food like eggs and sausages for breakfast, ham sandwiches for lunch, and burgers or chicken for super, followed by s’mores, of course.  This was, however, long before I became vegan.  But these are the foods I’ve long associated with camping.  Likewise, when I plan my meals, I want to use vegan options that are similar so I can capture some nostalgia.

You may want to do the same.  Or not.  You certainly don’t have to.  Perhaps you want to start your own traditions.  That’s a lot of  fun too!  In fact, breakfast, for me, is the area where I stray the most from my childhood camping eats.  But look at the amazing options I have:

Some of these options require a bit of preparation before heading out into the wilderness, but nothing too extensive.  I don’t have a lot of time to waste, so everything I cook is pretty simplistic.

Lunch and dinner tend to be the big meals of the day.  As such, more effort is put into them.  My grandparents, for example, the facilitators of our camping trips back in the day, practically had an entire deli spread out for our lunches.  There were a dozen different sandwich meats, two-dozen different condiments, ten side-dishes, and an assortment of chips and sodas.

While that sounds insane, our meals were an important part of our outings.  It’s where the family came together during their day to find nourishment, socialize, play cards, and make plans for the rest of the day (which generally included more cards).  There was quibbling, laughter, smack-talk, and swear-words all over politics and religion.

Still, everybody felt like they were a part of the family when chowing down on cole slaw or potato salad.  And they were, regardless of disagreements.  That’s why it’s incredibly important to me to make sure mealtimes are enjoyable and relaxing for everyone.  Everyone should feel like part of the group.

That doesn’t mean breaking the bank with ingredients or slaving away all afternoon instead of enjoying my time with my family.  It simply means providing quality, nutritious, and yummy food.  The folks coming together to eat this food will, ideally, do the rest.

Here are some ideas for your afternoon and evening meals:

You’ll also want to make sure to have plenty of snacks on hand.  Chips are always a staple, but be careful to choose ones without milk ingredients.  Old Dutch Dill Pickle Potato Chips are my personal favorite!  You should also be able to find vegan trail mixes, which are packed with protein and great for a hiking or biking snack.

This is by no means a complete list of all the vegan options you have.  The wonderful thing about vegan food is that there’s so much of it.  And you can be as healthy or unhealthy as you want!  The main thing is that you plan ahead.  Once you get a few vegan camping trips under your belt, you’ll feel more comfortable winging it.

And don’t forget, gelatin-free marshmallows are sold in most health stores and co-ops, so you can once again savor the s’mores!

What are some of your favorite vegan camping foods?  Let me know in the comments below.

Published in Food and Travel